Traditional Japanese sweets have been developed and loved as far back as the Yayoi Era (300 BD - 300 AD), the Iron Age that saw the beginnings of Japanese civilization. The modern term wagashi (和菓子 - Japanese sweets) was first written as kuwashi (果子), with the characters for "fruit" and "child" - in this case, meaning nuts - and the birth of wagashi came in the Yayoi consumption of fruits and nuts such as chestnuts, dates, strawberries, and melons.

With new tools available, Yayoi Japanese developed new ways of preparing and storing these fruits and nuts, which the brought with them to eat as snacks while hunting birds or tilling fields. Minimalist, natural, and healthy, the first wagashi established the essential elements of Japanese sweets that persist to this day.

From this simple snacking, more sophisticated wagashi were developed during the Heian Era (794-1185), which saw the flourishing of a refined, cloistered court culture through the import of Chinese innovations. Alongside the Chinese character, derived kana writing system, imperial court fashions, and Buddhist thought, Japanese envoys to China also brought back culinary innovations: the use of sugar, the brewing of tea, and the baking of starch-based sweets. The fire of Japanese dessert-making was lit, and Japanese bakers developed early forms of mochi and dango, two sweet types of rice flour-based wagashi, to be consumed as luxury items by the courtiers of Kyoto. 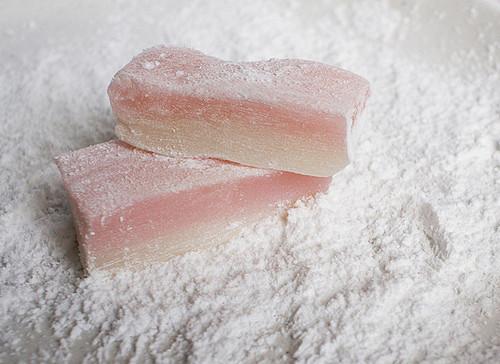 The Muromachi Era (1336-1573) was the feudal period that redistributed power away from the imperial court into the hands of shogun (generals) and local lords with troops of samurai. Accordingly, Muromachi wagashi developed a form to be enjoyed not in the courtyards of the capital but in the peaceful back-rooms of the feudal manor.

The Japanese tea ceremony evolved as the pinnacle of cultured aestheticism and spirituality and accompanying the bowls of rich matcha green tea were served small plates of wagashi. The varieties of Japanese sweets grew more luxurious, taking on colourful, striking forms prioritizing their aesthetic appearance. 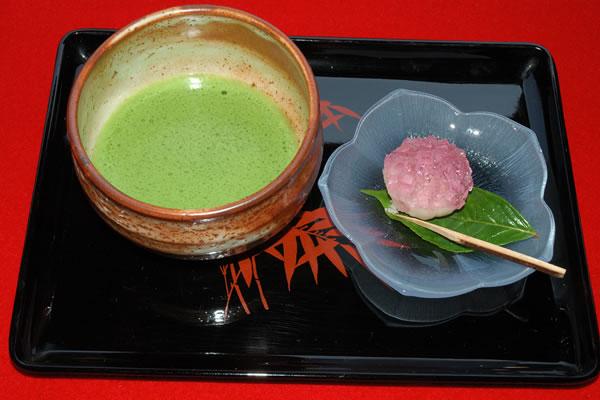 The diversity of Muromachi Era wagashi was enhanced by the arrival of Portuguese merchants in the 16th century, bringing with them bread-based European sweets. Particularly popular was the sponge cake castella, which took on a life of its own in Japan and has been a staple of traditional Japanese desserts for over 400 years.

In the following Edo Era of strict isolation (1603-1868), advances in Japanese agricultural technology and culinary methods allowed wagashi eating to spread for all classes of society to enjoy. The success of domestic sugar farming in the 18th century gave Japan independence from Chinese imports. What had been a luxury import for the high strata of society now lined the streets in Japanese food stalls that can still be seen today. The more widespread wagashi developed a strong identity in Japanese culture, and individual varieties became key components of Japanese festivals and holidays. 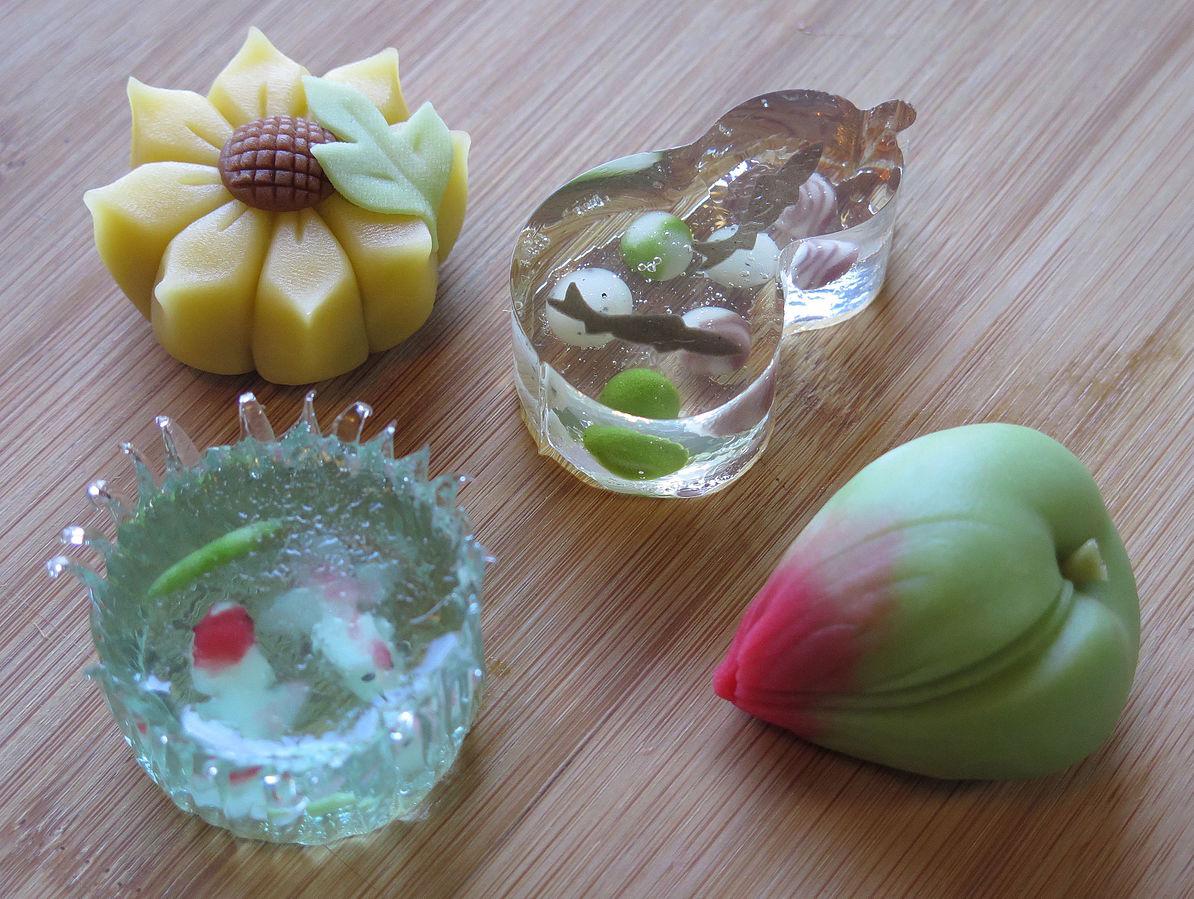 While Eastern sweets, such as cookies, cakes, and chocolates, have also gained a foothold in Japan's modern global era, traditional Japanese sweets still occupy a strong position in Japanese culture and are enjoyed by many Japanese people today. Renowned author of the early 20th century Junichiro Tanizaki compares the appeal of Japanese and Western sweets thus:

"It has been said of Japanese food that it is a cuisine to be looked at rather that eaten. I would go further and say that it is to be meditated upon, a kind of silent music evoked by hte combination of lacquerware and the light of a candle flickering in the dark. Natsume Soseki, in Pillows of Grass, praises the color of the confection yokan; and is it not indeed a color to call forth meditation? The cloudy translucence, like that of jade; the faint, dreamlike glow that suffuses it , as if it had drunk into its very depths the light of the sun; the complexity and profundity of the color - nothing of the sort is to be found in Western candies. How simple and insignificant cream-filled chocolates seem by comparison!" 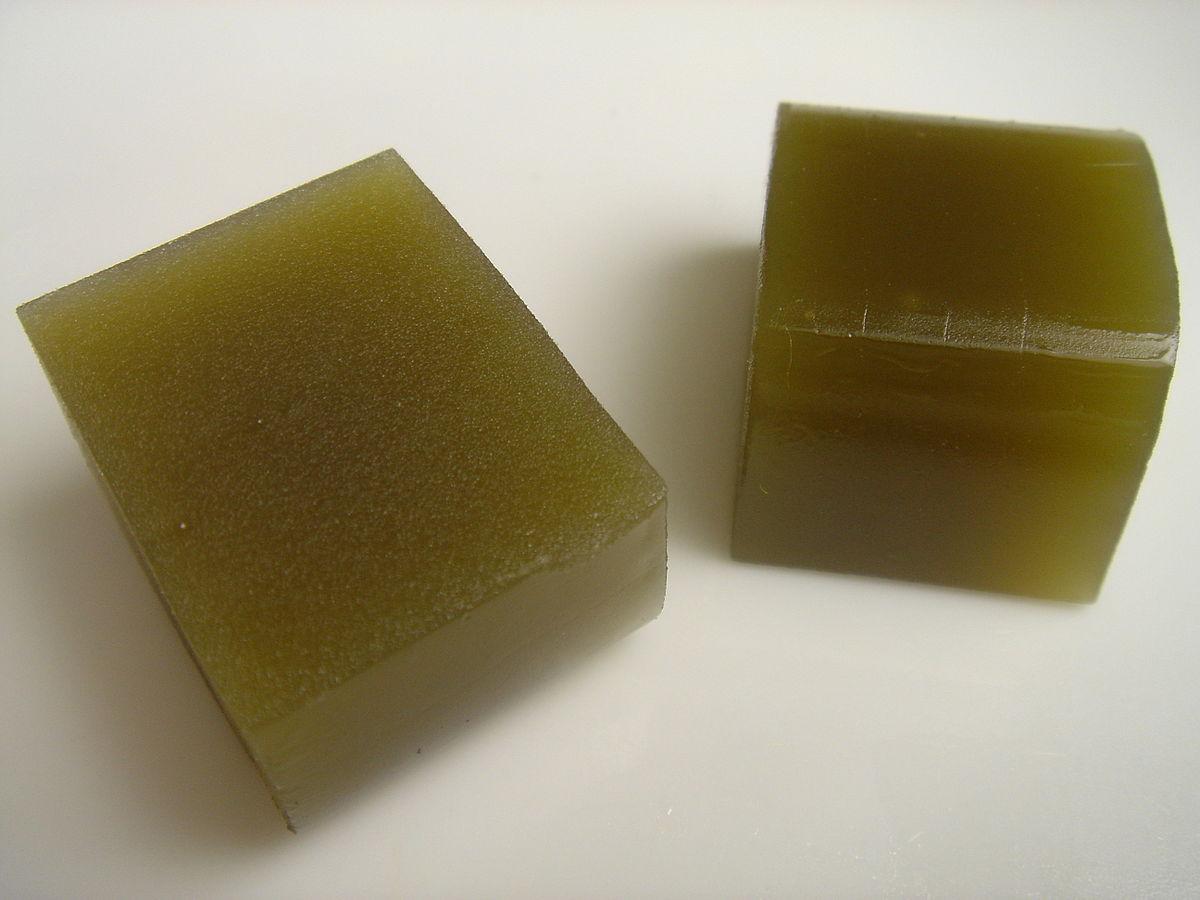 Yōkan, a type of wagashi

Unlike their highly sugared and buttered Western counterparts, traditional Japanese sweets are low in sweeteners additives, inst4ead preserving the more subtle, natural flavours of their ingredients. Along with being more healthy, this restrained sweetness leads to a different, as Tanizaki puts it, more meditative character.

Wagashi were not designed to compete in the high-paced, stimulus-loaded modern market; they were intended to be enjoyed in the contemplative, reclusive tranquillity of the tea room. They were not conceptualized in a culture which teaches sweet-eating as a guilty escape; they were shaped in pursuit of an inner spirituality that frees the mind from desire and appreciates simple beauty.

Instead of pure sugar or syrup, wagashi often use for a sweetener a red bean paste mixed with sugar called anko. The range of base ingredients has grown throughout wagashi's history, including both traditional rice paste and chestnut-based sweets and more modern varieties, including potato starch, starch from the root of a Japanese plant called Kuzu, castella sponge cake, and gelatin made from algae called Kanten, or agar. Other common flavourings include matcha powder and honey.

Wagashi can be widely divided into two types; namagashi (生菓子 - raw sweets) and higashi (干菓子 - dried sweets). Namagashi are defined as sweets composed of above 40% water and are very popular for their deep, succulent flavour. Well-known types of namagashi include mochi, yokan, and manju. Higashi, as their name implies, are dried snacks such as wafers, biscuits, and cakes. Examples of Higashi include monaka, rakugan, and dorayaki.

Consisting of anko wrapped in pounded rice paste, mochi is the quintessential wagashi. Mochi is also well known for the traditional processs of hammering out mochi paste, a  two-person full-body task that is sometimes enjoyed by Japanese today at festivals and other events. 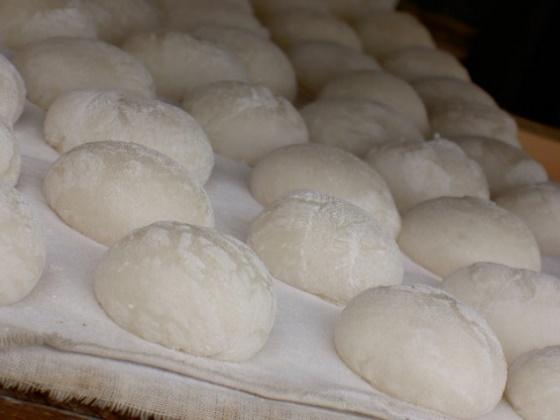 Made from agar mixed with flavourings including red bean paste, matcha powder, sugar, and white bean paste. Yokan were first eaten by Zen Buddhist monks as an inter-service snack, often accompanied by a glass of green tea. Now, they are recognized as one of the most important traditional Japanese desserts. Yokan are especially delicious when eaten cold. 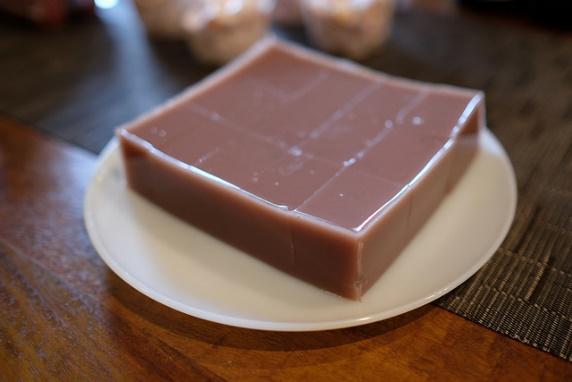 A favourite as Sakura viewing(hanami) outings, dango are small balls of rice-paste typically served on skewers of 3-5. They are also known for the proverb Hana yori Dango(花より団子 dango over flowers), teaching to prioritize necessities before embellishments. 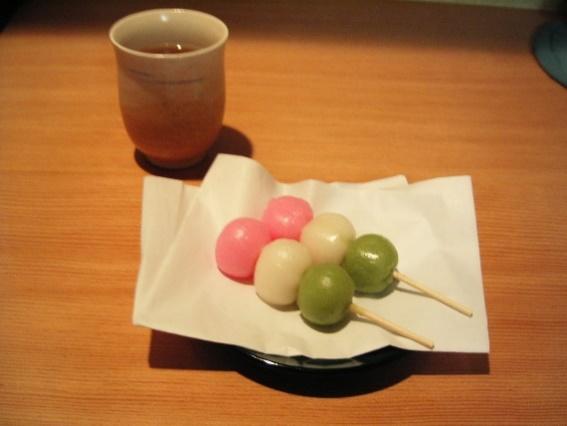 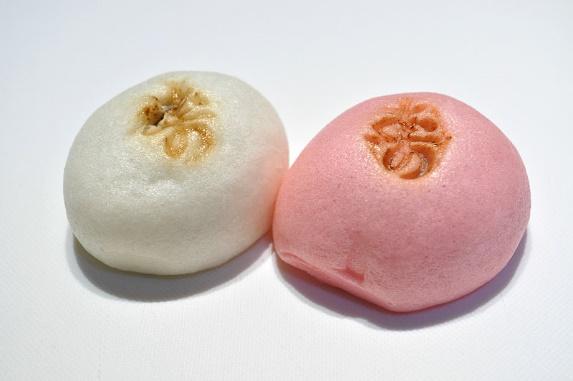 Known widely as the favourite food of the cartoon character Doraemon, dorayaki consists of two sponge-cake discs sandwiching a filling of anko paste. 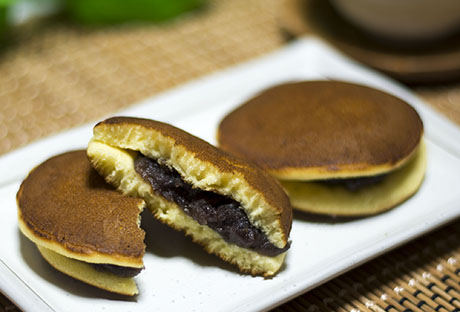 A perennial favourite at summer festivals for its charming appearance, taiyaki is made from sponge-cake baked into the shape of a porgy fish, typically with a filling of anko paste. Taiyaki is still a very popular street food, served from food stalls. 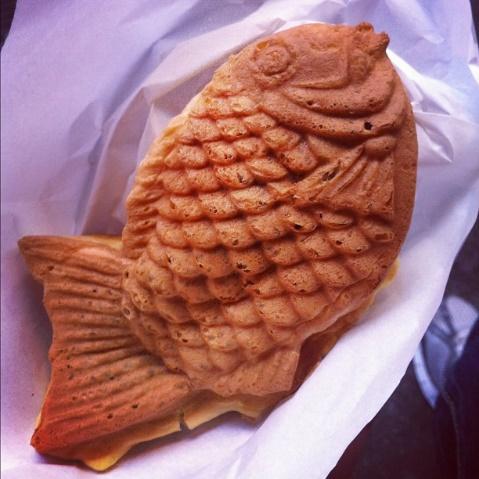 Imported from Portuguese merchants in the Muromachi period (1336-1573), the Castella sponge-cake took on a life of its own and became a staple in Japanese confectionery. 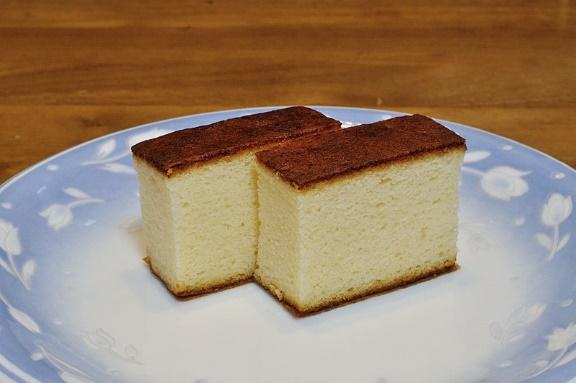 A popular seasonal treat in Spring, sakura-mochi is made from rice-paste wrapped in a salted cherry blossom leaf. This arrangement makes sakura-mochi a very aromatic sweet, allowing eaters to breath in the season as the eat. 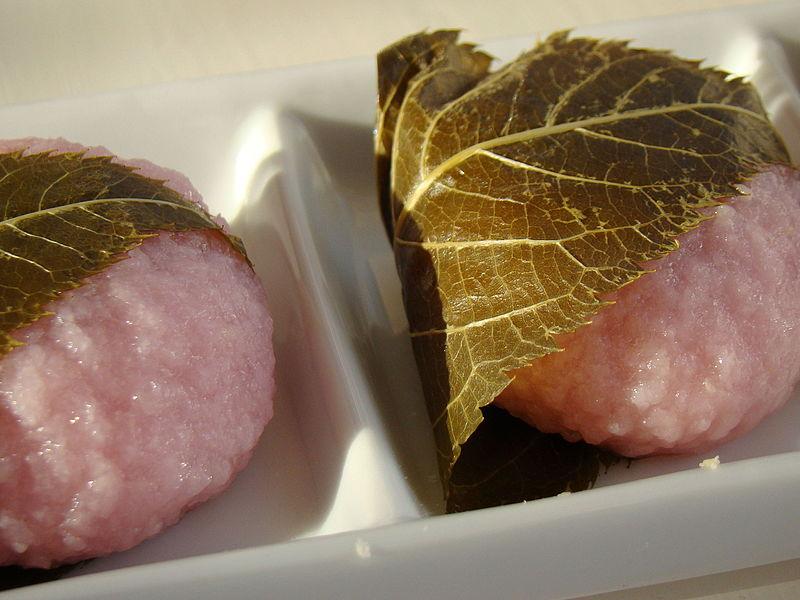 Brought over to Japan during the Heian era, chimaki is a bamboo leaf-wrapped rice cake that comes from the Chinese Zongzi. Chimaki is traditionally served at Children's Day (a Japanese Holiday on May 5th), and comes in both triangular pipe shapes. 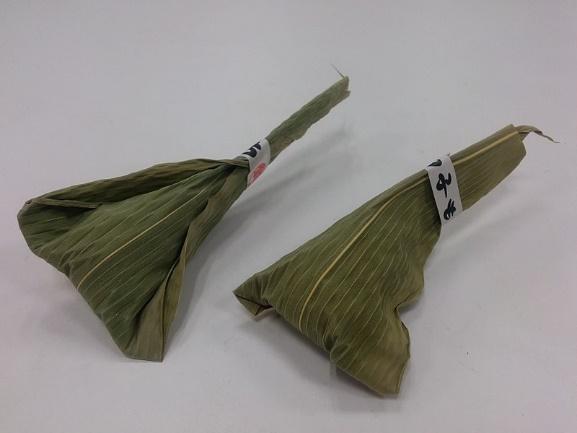 Nerikiri is a type of rich dough made from white bean paste and rice flour. The supple nerikiri dough molds well under the baker's hands and many Japanese sweet makers take advantage of this flexibility to cook nerikiri into many beautifully decorative forms. 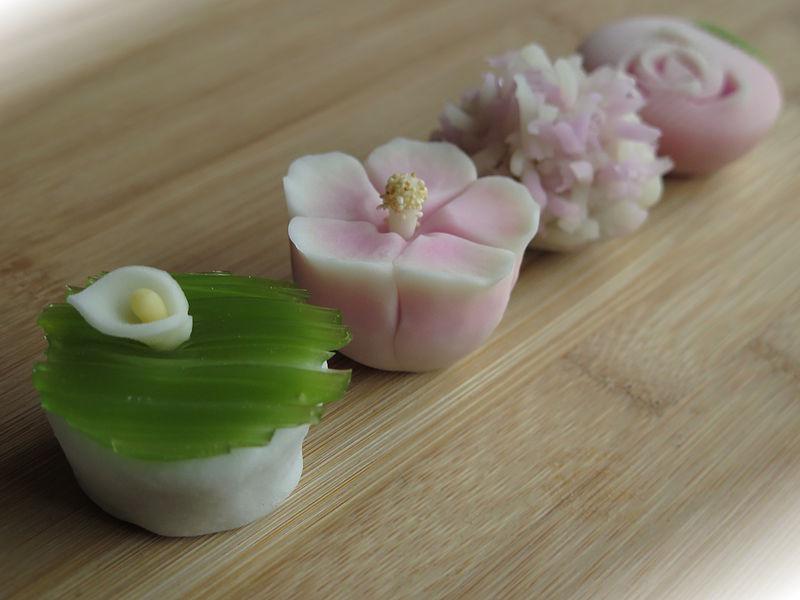 Traditionally served with anko paste wedged between two baked wafers, monaka is a type of higashi that remains popular today. Monaka has taken on a second life in the modern Japanese convenience store with new flavours mixing in ice cream or chocolate alongside (or instead of) the anko paste. 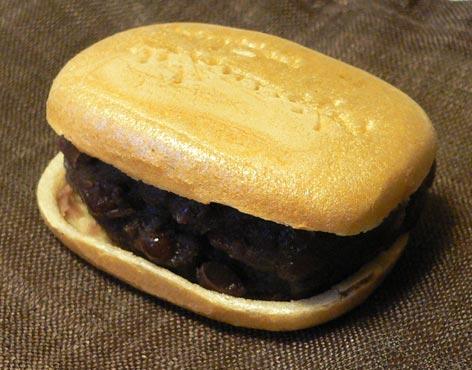 One of the most visually appealing varieties of wagashi, rakugan are baked higashi made from a biscuit base of flour and sugar. Rakugan literally means "Fallen goose"; one theory suggests that this name derives from the popular practice of sprinkling sesame on the sweets, with the name likening the image of the falling sesame to a flurry of goose feathers. 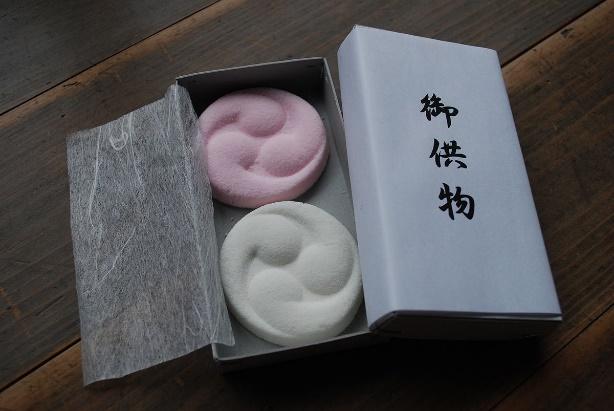 With a name meaning "baked dolls", ningyo-yaki is a softer higashi that, like its crispier cousin taiyaki, consists of anko-filled sponge cake baked in molds. Traditionally, these molds took the shape of the Shichi-fuku-jin (七福神), the seven lucky gods with shrines in Ningyo-cho, the neighborhood from which ningyo-yaki originate. Now, ningyo-yaki can come in a wide range of forms, from famous Japanese architecture to popular cartoon characters such as Doraemon or Hello Kitty. 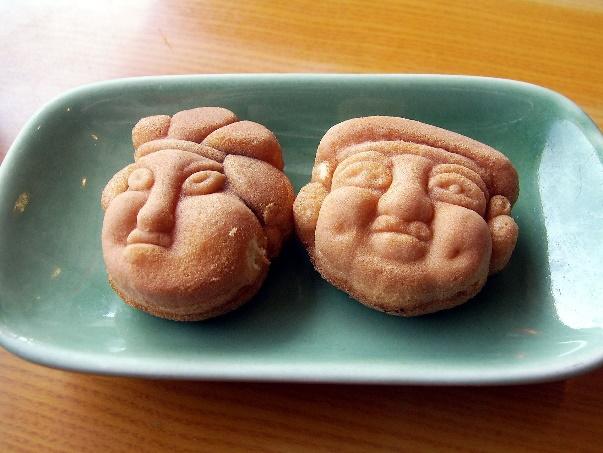 How to Enjoy Wagashi on your Trip to Japan

Like many Japanese traditional arts, wagashi has been well-preserved and appreiated as it has modernized, and there are many ways for visitors in Japan today to enjoy wagashi. Japan's omnipresent convenience stores feature both traditional wagashi such as dorayaki, mochi, and taiyaki, as well as innovative versions flavored with matcha powder, whipped cream, chocolate, and ice cream. These modernized wagashi are much more familiar to a western palate, so more hesitant tourists may want to give these versions a try.

Those looking for a more traditional flavor can try venturing to a wakafe (和カフェ - Japanese traditional cafe), where traditional Japanese sweets are served alongside green tea or western drinks such as coffee and hot chocolate. Wagashi can also be purchased directly for leisure consumption and souvenir purposes at Japanese bakeries, which can be found in train station shopping malls or department stores.

Finally, you can enjoy wagashi alongside other traditional Japanese festivities at Japanese summer festivals, where taiyaki, dango, and dorayaki can be easily found at stalls.